‘Contemptible’ was the proud adjective that survivors of the original Expeditionary Force used to describe themselves after the Kaiser had supposedly dismissed them as “General French’s contemptible little army” on 19 August 1914.

It is my Royal and Imperial Command that you concentrate your energies, for the immediate present upon one single purpose, and that is that you address all your skill and all the valour of my soldiers, to exterminate first, the treacherous English and walk over General French’s contemptible little Army.
Kaiser Wilhelm II, Headquarters Aix-la-Chapelle
19 August 1914

Unlikely though it seems that the German army would have been ordered to delay its march southwards in order to destroy the tiny British force that stood in its way, it is true that Germany was particularly outraged by Britain’s declaration of war: perfidious Albion, dishonest, treacherous, self seeking. “Gott strafe England”, God punish England, declared their propaganda posters, that’s what she deserves. Germany could admire France and Russia, their soldiers were after all fighting to defend their countries. But there was no honour in Britain’s war, she was just out for gain, her army no better than mercenaries who went where they were paid to go.

Despite this bitter antagonism, it is extremely unlikely that any such order was ever issued by the Kaiser and far more likely that it came directly from the headquarters of the British Army. And if it did, it was probably the most inspired piece of propaganda that body ever issued.

There was suspicion about the Kaiser’s order from the very beginning. On Monday 26 October, under the heading, ‘German Wireless News, Berlin Oct. 25’ the following report appeared in The Times:

It has been reported that at Aix-la-Chapelle on August 19, the Kaiser referred in an Army Order to “the contemptible little army of General French.” The Kaiser has not been to Aix-la-Chapelle since the outbreak of war, and he has never issued such an army order.

This was followed by a letter in the Spectator on 31 October from FR Cave of Bath. He emphasised that “no proof what-ever has yet been forthcoming of such an Army Order having been issued.”

But who was going to let that get in the way of a good story. The British public’s pride was piqued, did the Germans not know that they were in fact fighting “incomparably the best trained, best organized, and best equipped British Army which ever went forth to war”? *, the heirs of Henry V’s “gallant few”. No wonder the bowmen of Agincourt had appeared to protect it at Mons … even if they hadn’t.

This was another fiction, a short story by Arthur Machen published in the London Evening News on 29 September 1914. It told how a group of British soldiers, cut off and outnumbered at Mons, had prayed to St George and immediately the ghosts of the fallen archers from Agincourt had appeared, drawn their longbows and showered the approaching Germans with arrows, killing them without leaving a mark on their bodies. This became one of the most enduring stories of the war and even Arthur Machen couldn’t persuade people that it wasn’t true. 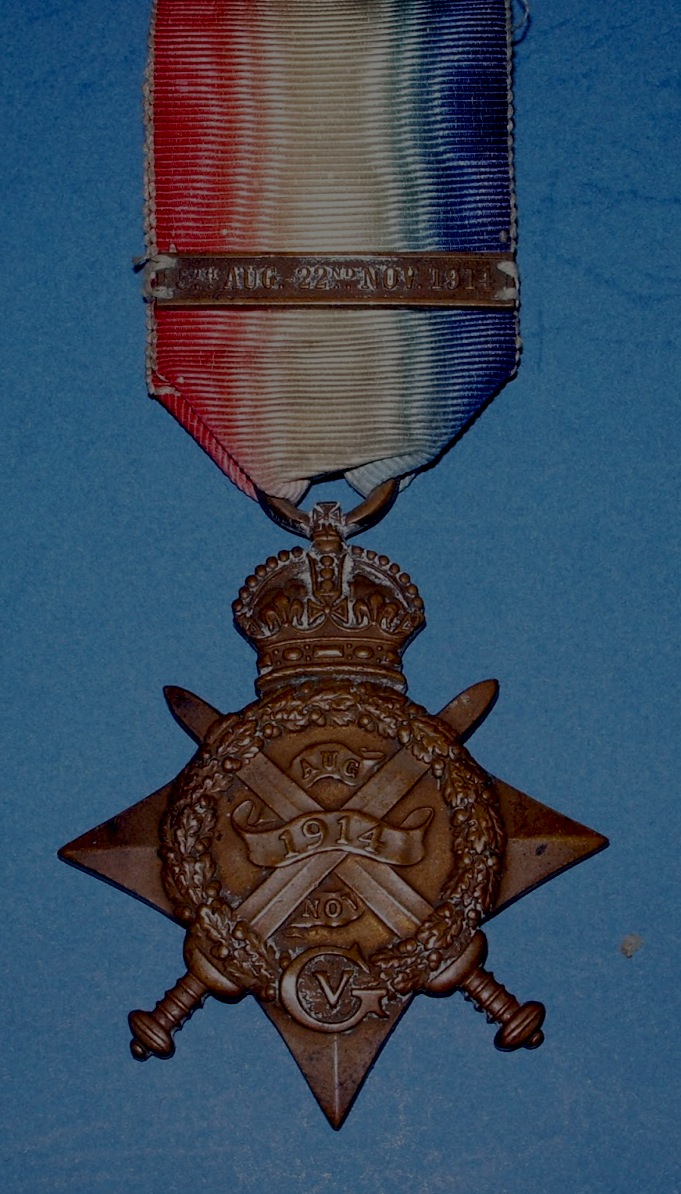 The 1914 Star with the clasp awarded to those who had been under mobile artillery fire between the qualifying dates, 5 August and 22 November 1914.

There was however an element of truth in both these fictions. The British army certainly was ‘little’ and it had certainly been outnumbered. The first contingent of the BEF that crossed to France in August 1914 numbered scarcely more than 100,000 men and represented approximately half the immediate combat strength of the British Army. Germany had mobilised an army of 1,850,000 and the French, our allies, one of 1,650,000. When in 1917 a medal, the 1914 Star, was awarded to all those who had served in France and Belgium between 5 August and midnight on the 22 November 1914, the total amounted to 365,622. This included soldiers in both the British and Indian Army, civilian doctors, nursing sisters, other military hospital personnel, members of the Royal Navy, Royal Naval Reserve, Royal Naval Volunteer Reserve and the Royal Marines.

In 1925, Major General Sir Frederick Maurice, together with a German general, attempted to get to the bottom of the supposed Aix-la-Chapelle order. They had the archives in Berlin searched, which made it appear even more unlikely that the order could have been issued, least of all on the 19 August because on the 20th the German army had no idea where the British were. A telegram from the Chief of the German General Staff sent to General von Kluck, commanding the German First Army which was on collision course to meet the British at Mons in only three days time, stated,

“Disembarkation of English at Boulogne must be reckoned with. The opinion here, however, is that large disembarkations have not yet taken place.”

This wasn’t the only problem, it turned out that German military headquarters had never been based at Aix-la-Chapelle, and in any case the Kaiser never issued routine orders they were always issued through the army.

None of this, however, prevented the term ‘old contemptible’ from being adopted with pride by members of the first expeditionary force, and in 1925 an Old Contemptible Association was formed. The last member, Alfred Anderson died in 2005 aged 109.

Perhaps the final word however should go to the Kaiser, by 1925 an exile at Doon in Holland. Asked whether he had ever described the BEF as “General French’s contemptible little army” his negative reply apparently included the words,

On the contrary, I continually emphasized the high value of the British Army, and often, indeed, in peace time gave warning against underestimating it.