The Battle of Mons

It took five days from the declaration of war for the first troops of the British Expeditionary Force to be ready to leave for France, and seven more for the exercise to be complete. In those twelve days thousands of army reservists were recalled and issued with uniforms, 120,000 horses were requisitioned and 1,800 special trains deposited food, stores, ammunition, equipment and men at the embarkation ports: motor transport and petrol at Avonmouth, stores and supplies at Newhaven, frozen meat at Liverpool and men at Southampton. By the 16 August the BEF was in France, the whole event accompanied by a complete news blackout so that the first the British public knew about it, let alone the Germany army, was when the press published the news on 18 August.

Meanwhile Belgium had all but fallen to the advancing German army, France had begun the defence of her frontiers, Austria had invaded Serbia, Russia had defeated Austria and was advancing into East Prussia as well as into Galicia and the war had already spread to Africa and the Far East. On 5 August to the delight of the British public, HMS Amphion sank the German cruiser, Konigen Luise, which was mine laying in the North Sea. The next day Amphion struck one of Konigen Luise’s mines and went down with the loss of 151 British sailors and 19 from the Konigen Luise.

By 19 August the Expeditionary Force, advancing from the ports of Rouen, Le Havre and Boulogne, were just south of the Belgian town on Mons, close to the French border. British soldiers had been here before, most recently 99 years earlier when they won their famous victory at Waterloo 34 miles to the north of their current location. And in 1709 they had been only 11 miles away when after an exceptionally bloody battle they forced the withdrawal of the enemy from the field at Malplaquet. Only in both these cases it was the French who were the enemy and the Prussians part of the allied coalition.

Aerial reconnaissance on the 20 August spotted a large German column, “stretching as far as the eye can see”, heading south towards the French border. The British prepared themselves for battle along the line of the Mons-Condé Canal, their task to prevent the encirclement of the French Fifth Army to the east. On the 22nd two squadrons of Dragoons made contact with a troop of Uhlans and in a scene more reminiscent of those earlier battles than the ones we’ve come to associate with the First World War, charged them with drawn swords and engaged them in hand to hand combat.

The next day, Sunday 23 August, German artillery opened fire on the British lines and at 9 am attempted to storm the bridges across the canal. The British troops’ rapid rifle fire – an individual soldier could fire up to 30 aimed rounds a minute with his .303 Lee Enfield rifle – is always said to have convinced the Germans that they had more machine guns than was in fact the case. But it was a machine gun, or rather the men who fired it, who turned out to be the heroes of the day.

The 4th Battalion Royal Fusiliers were defending the bridge at Nimy, with a machine-gun section led by Lieutenant Maurice Dease. When every member of his section had either been killed or wounded, Dease took over the machine-gun until severely wounded himself he was forced to withdraw. He died soon afterwards. At this point Private Sidney Godley took over the gun. He too was wounded and as the Germans advanced across the bridge he dismantled it and threw it into the river before being taken prisoner. Both Dease and Godley won Victoria Crosses for their actions on the Bridge at Nimy, Godley being informed of his award by the German commandant of his prison camp. 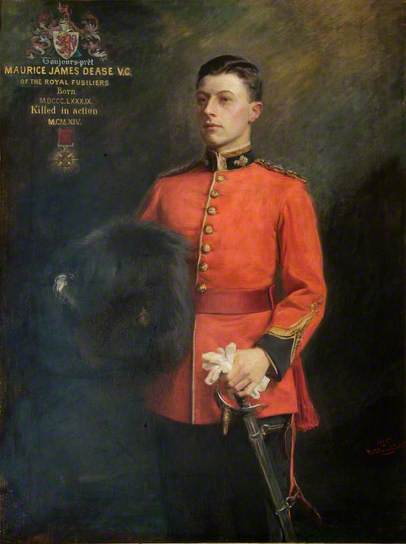 Greatly outnumbered by the enemy, 70,000 British troops with 300 guns faced 160,000 Germans with 600 guns, the British considered they had fought well. The soldiers were therefore dismayed when at 3 pm on the 23rd they received orders to withdraw. Little did they know that this ‘withdrawal’, the Retreat from Mons, wouldn’t stop until they had covered over 200 miles and reached the river Marne two weeks later on 5 September.

British casualties from the battle were estimated to be 1,600 killed, missing and wounded with approximately half the casualties coming from the 4th Middlesex Regiment and the Royal Irish Regiment. The dead from the battle were buried in civilian cemeteries in Mons and its surrounding villages. Then in November 1915 the Germans began to exhume the bodies and rebury them in a plot of land in the district of St Symphorien just SE of Mons. The Belgian who owned the land only agreed that it could be used as a burial ground on the condition that British soldiers were treated with the same dignity as the Germans. Now known as St Symphorien Military Cemetery it is under the care of the Commonwealth War Graves Commission and contains the bodies of 334 Commonwealth and 280 German servicemen. This includes the bodies of the first and last British soldiers to die during the fighting, the fortunes of war having brought the British army in November 1918 to exactly the same place they had been in August 1914.