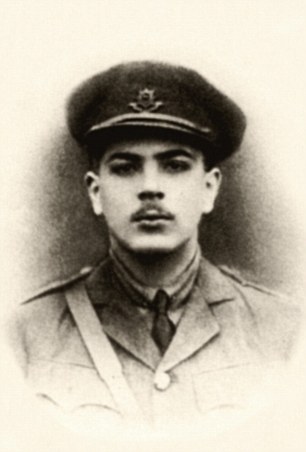 Like many bereaved parents, Roland’s mother wrote a memoir of her son, but hers was completely unlike any other that was published. Called ‘Boy of My Heart’, it looks exactly like a novel. The dust jacket has an idealised sepia sketch of a handsome young man in uniform, and the hard cover is embossed with a heart of stars. Inside the covers the resemblance to a novel continues:

Chapter 1 Waiting
It is half past nine at night and I an eager hearted woman, sit waiting still for dinner, with a letter open before me from my son in the fighting line.

It’s Christmas Day and the letter says that her son will be arriving home for leave today so the family are waiting for him before they have dinner. As she sits by the fire, the mother allows her thoughts to wander back over his life. Referring to him throughout as either Little Yeogh Wogh or Boy of my Heart, she recalls his academic triumphs – scholarships to Uppingham and Oxford – his childhood exploits, his comments both profound and trivial and, in particular his request that should always come up and say good-night to him once he was in bed. Eventually they hear the long-awaited knock at the door but it’s not her son, it’s a telegram to say that he has been killed in action.

The book ends here. It is sentimental, melodramatic and exactly the sort of book for which its author was famous since the ‘eager-hearted mother’ was the novelist Marie Connor Leighton, author of over fifty- 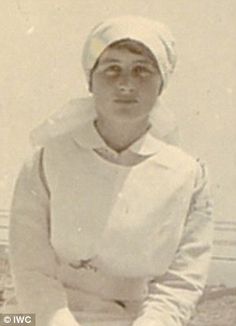 four hugely popular romantic novels of which this is not one. And her precious son, ‘Little Yeogh Wogh’, is Vera Brittain’s fiance, Roland Leighton. It is impossible to recognise Vera’s Roland in Marie’s Little Yeogh Wogh, but Marie’s book was poured out within the first few months of her grief whereas Vera’s took seventeen years to write and is a mature and considered reflection on that period of her life and of the man who dominated it.

Roland was the Leighton’s eldest son. His father, Robert, also an author, wrote tales of wild adventure for boys. And his sister, Clare, who had drawn the portrait of Roland for the cover of Boy of My Heart, later became a well-known wood engraver. However, it was Marie, who frequently expressed her scorn for the need to educate women, who was the main wage earner in the Leighton household. Roland, engaged to an undergraduate at Somerville College, Oxford had grown up endlessly listening to his mother’s philosophy: “Never forget that a blue stocking is a woman who has failed in her sex and that the few females who find their way to university are inevitably far from being the well bred women of England”.

There can hardly have been two more different women than Vera Brittain and Marie Leighton and yet through Roland they both shared a love of the same poem:

A wink from Hesper, falling
Fast in the wintry sky,
Comes through the even blue,
Dear, like a word from you …
Is it good-bye?

Across the miles between us
I send you sigh for sigh.
Good-night, sweet friend, good-night:
Till life and all take flight,
Never good-bye.               W.E. Henley Echoes XLII

Roland had written to Vera from the Front on 1 May 1915: “A little poem of W.E.Henley’s came into my head last night as I walked across the fields in the starlight. Do you know it?” He copied out the words for her and she recorded in her diary, “I shall cherish this poem now as long as I live.” Marie chose the the last three lines for Roland’s headstone but in her own version, not Henley’s. She changed the first word of the penultimate line from “Till” to “Though” and thus completely altered the meaning. It’s not recorded what Vera thought of this but these final lines had become the way she and Roland signed off their letters to each other. However, this was Marie’s eternal good-night, the fulfillment of the promise she had made to her son immediately on receiving the news of his death, when:

Through the rolling, blinding waves of mist there came to me the old childish cry: ‘Come and see me in bed mother’. And I heard myself answering aloud, ‘Yes, Boy of My Heart, I will come. As soon as the war is over I will come and see you in bed – in your bed under French grass. And I will say good-night to you – there – kneeling by your side – as I’ve always done.

To both Marie and Vera the tragedy of Roland’s death was compounded by the fact that they received the news at the very moment that they expected to be receiving Roland himself. Vera

had just finished dressing … when the expected message came to say that I was wanted on the telephone. Believing that I was at last to hear the voice for which I had waited for twenty-four hours, I dashed joyously into the corridor. But the message was not from Roland but from Clare; it was not to say that he had arrived home that morning, but to tell me that he had died of wounds at a Casualty Clearing Station on December 23rd.

For both of them too, the fact of his death was made more distressing by the fact that it was completely devoid of any kind of glory. They both believed that Roland was the sort for whom, “One crowded hour of glorious life was worth an age without a name”. It was indeed what Roland had once believed, in the early days, when he was desperate to join the fighting and thought that his short sightedness would prevent him. But it was a long time since he had felt this.Within three weeks of arriving at the front in April 1915 he had told Vera, “There is nothing glorious in trench warfare. It is all a waiting and a waiting and a taking of petty advantages … And it is all for nothing – for an empty name, for an ideal perhaps – after all”.
In the nine months Roland was at the front, he never saw any action. He was sniped at and shelled in the trenches but he was never involved in any direct fighting. The night he was killed, the battalion were in new trenches and Roland had gone to inspect some wire that needed mending. The communication trench was flooded, which meant that he had to use a concealed path reached by a gap in the hedge. Unfortunately the communication trench had been flooded for some time and the Germans were perfectly aware of the new route, a fact which the previous occupants of the trench had failed to point out to the men who relieved them. It was a bright moonlit night and the moment Roland appeared in the gap he was hit by a sniper’s bullet. He was brought in under fire by his Company Commander, Captain Adams, and Sergeant Day. This was the evening of 22 December. Roland survived twenty-four hours, heavily sedated with morphia. Then at 11 o’ clock on the night of the 23rd, as Vera recorded in her diary, “Uppingham’s record prize winner, whose whole nature fitted him for the spectacular drama of a great battle, died forlornly in a hospital bed”.
Later she expressed herself more brutally, lamenting that Roland had been “shot like a rat in the dark”. As if to emphasise the mundanity of his death, the regimental history notes, “Few events of any importance occurred in the interval between Loos and the New Year”, with a footnote, “On 23 December Lieutenant R.A. Leighton was mortally wounded”.
If Vera and the Leighton’s harboured any illusions about the nature of Roland’s death, these were viciously dispelled by the return of his kit, including the uniform he had been wearing when he was shot. This was torn back and front by the bullet, stiff with blood, the breeches unceremoniously slit by the orderlies trying to get at the wound. Everything – letters, bills, shaving kit and clothing was caked with stinking mud. Reports vary but the Leightons either burnt or buried it all.
Roland was buried in Louvancourt Military Cemetery, close to the Casualty Clearing Station where he had died. Six years after his death, Vera and her friend Winifred Holtby, visited the grave. Recording the occasion in Testament of Youth, Vera recalled,

I left Louvancourt, as I thought unperturbed, I had read the inscription on Roland’s grave and gathered a bronze marigold to keep in my diary without any conscious feeling of emotion. Whatever, I decided, might be true of 1915, I was beginning to recover from the anguish of its second Christmas. But late that night, back in the Paris hotel, I picked a quarrel with Winifred over some futile trifle, and went to bed in an agony of tears.